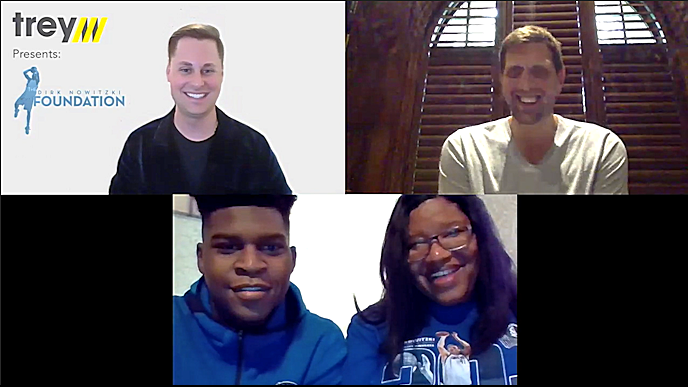 Dirk Nowitzki is a true icon. As an athlete, he was a 14-time NBA All Star and was named NBA MVP in 2006-07; Dirk led the Dallas Mavericks to 15 playoff appearances, including the NBA Finals championship in 2011, where he also won Finals MVP. ESPN ranks him the #19 greatest basketball player of all time, thanks in part to having scored the sixth most points in NBA history.

Dirk also shines off the court. Through the Dirk Nowitzki Foundation, Dirk makes hundreds of appearances each year, signs thousands of autographs, and funds organizations that help kids in Dallas, Germany, and Africa. Dirk was awarded the 2007 NBA Community Assist Award for his philanthropy and community work. He also served as the 2013 German ambassador for UNICEF, and in 2018, Dirk was awarded a key to the city of Dallas.

But how did Dirk become such a legend? In May 2020, Trey Athletes, a Dallas-based youth sports nonprofit, sat down with Dirk for an exclusive fireside chat, and here is what we learned.

1. Find a Mentor: Dirk says that having a mentor who understands you as both an athlete and a person is crucial to success. A good mentor helps you set the right goals and holds you accountable to meet them.

2. Do What You Love: Dirk learned early on that you have to focus your energy on what you love to do. Becoming great at something means putting in extra hours to separate yourself from others. If you don’t have passion and truly enjoy the process, you won’t have the drive you need to become the best.

3. Give Back to Others: Dirk believes that giving back to your community is not only rewarding for you — it’s your responsibility as an athlete! Giving back can take many forms, such as volunteering your time, donating money, leveraging your personal platform to increase community awareness, or using your expertise to educate others.

4. Never Be Satisfied: Dirk understands that to be truly great, you need a growth mindset and the drive to outwork your competition. You can always get better or learn something new; building your identity and knowledge off the court will help you to be a well-rounded person and a better athlete.

5. Be Yourself: Dirk tries hard to be himself, both on and off the court. It’s important to enjoy the journey and have fun. Everyone makes mistakes; the most important thing is to be honest and to learn from those missteps, so you don’t repeat them.

These five tips make it clear why Dirk is a legendary athlete, a positive role model, and an influential community leader. To get more tips from Dirk, watch the full Trey Athletes x Dirk Nowitzki fireside chat, and read about it on WFAA, CBS DFW, and NBC DFW.