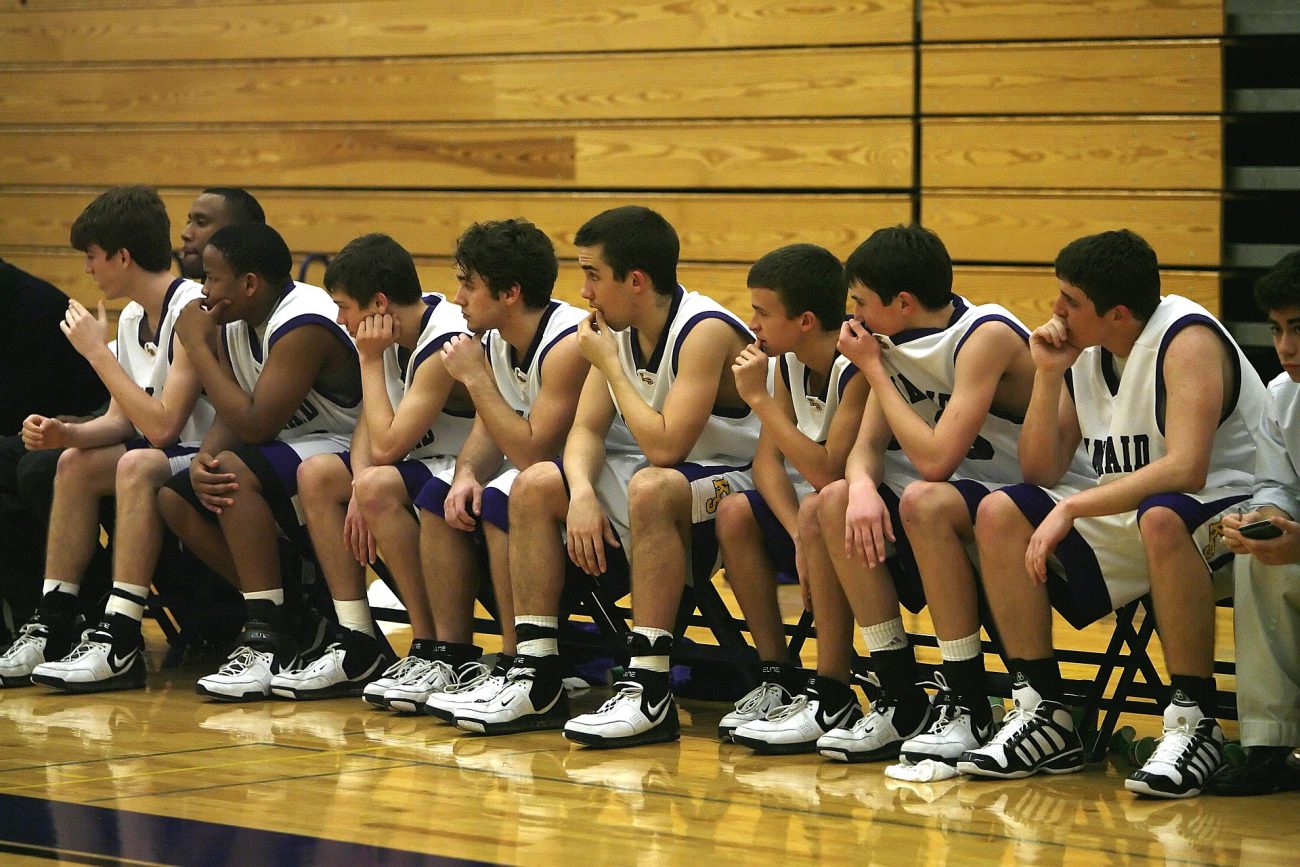 If you’re a high school basketball player, you probably hope to get a scholarship to your Dream School. You anxiously wait for the brief check-in emails and phone calls from college coaches. You put up your biggest smile to mask your fear when visiting your Dream Team. If someone asks you, “Are you sure you want to do this?” you confidently say, “I can’t imagine my life without basketball.” You can already imagine it: wearing that Dream Team Jersey, and standing on the free throw line to make the winning shot, while fans and friends yell your name from the crowded stands. Your coach, who in the recruiting process was probably amazed by everything you did, says “Great job, my well-chosen freshman.” Your grades are great, your teachers love you, you find your social circle, and you have a team, a family who you can depend on. That’s your dream. That was my dream too, but it didn’t take long for me to realize that the life of a college athlete is more complicated than that. When I got recruited by my Dream School, I was over the moon. As someone from a forgotten small town in one of the underdeveloped countries of Eastern Europe, I considered the chance to study and play overseas to be the solution to all my problems. Finally, I wouldn’t have to struggle to juggle school and sports. Finally, my teachers and my coaches would understand that I am committed to both of my passions. Finally, I could end all of those sleepless nights after a basketball tournament, when I crammed for some exam. Finally, I could have a social life. I would have a family. I would have a home. After moving and transferring multiple schools throughout high school, I was desperate to finally settle down and enjoy four years of a perfect college life.

Initially, college fit my expectations. I met a great group of people during orientation; I got the classes I wanted; I had a great schedule; I was super excited to get to know my fellow freshies and the rest of the team. I had tough moments during conditioning and lifts, but overall I was happy with my performance in practice. I hoped that by our first non-conference game, I would be ready to help my team.

My dream couldn’t last forever, though. As we got further in the term, I started to have more work, and sourness kicked in. I was always tired, stressed and anxious, because there wasn’t enough time to get both my school and basketball “jobs” done. My open, “let’s get to know everyone,” attitude was crushed by the weight of my daily routine, and I felt that my relationships with my teammates weren’t evolving. Even though we saw each other at practice and in class, my busy schedule didn’t leave me enough time to hang out with them otherwise. And my non-athlete friends from orientation? They disappeared in the rush of freshman fall. So, I remained alone with my Psych homework, and my ambition to succeed academically.

By the time finals week came, I felt terribly alone, a quiet introvert struggling to fit in among an always-shouting team of extroverts. I felt like all the drills, all the lifts, and our 3-hour military workouts that we called “practice” were useless. Preseason games started, and I slowly realized I was in a familiar freshman situation—at the end the bench. After a couple of 0-minute games, I contemplated that maybe I had made the wrong decision.

As the season continued, feelings of fatigue, loneliness, stress and being useless started to fill my daily thoughts. Although I pretended to be positive, cheerful and motivated, on the inside I started to lose my confidence and my passion for the game. To my coaches and teammates, I always said I was okay. I talked about how much I enjoyed my classes, which was mostly true; academic success was the only thing keeping me on the surface. I shared my plans for improving my game, and my thoughts on how European basketball differs from American. To them, I probably seemed like someone with her life together.

The better I played my role to others, the more I felt I was losing control on the inside. The only time I allowed myself to complain was when I called home. At first, my parents listened patiently and tried to boost me up, but after a time they couldn’t bear it anymore. One winter morning, I called my mom aching from loneliness and crying to come home. She didn’t have words and almost started crying too. Feeling her worry, I decided at that moment that I couldn’t bother my parents with my problems anymore. I would have to go through this alone.

My team was also struggling. Despite being hungry for victory and playing well, my team continued to lose tight games, and our coach’s initial positivity slowly transformed to anger. Coach said we were inadequate—I saw it as a lack of confidence and trust in each other. Coach said we were selfish—I saw desperate efforts by every team member to change the situation. Coach said we lacked commitment—I saw a fear of failure, and the desire to escape from the negative atmosphere surrounding our team. Everyone was anxious, and it showed. Shots weren’t going in, the number of turnovers was increasing, we got the baseline more often to run, and more and more people got injured. Something went very wrong.

I couldn’t escape this negativity. After a long vacation at the end of the bench, my coach finally gave me a few minutes of playing time. I was super excited, but as I ran onto the court, I thought only one thing: “Whatever you do, just do not mess this up!” Of course, then I messed up. This thought stayed in me for the rest of the season. First, I only got frustrated in practice by missed shots or bad close-outs. Later, I wanted to cry all the time. By the end of the season, I would become so anxious that by the end of game warm-ups, the pressure in my chest was so intense that I could barely breathe. No matter how much I rested, my body and my mind were incredibly tired. I felt like a total failure.

Just when I thought I couldn’t take anymore, the season ended, and I got a brief window to go home. I hoped that two weeks with my family and the people who made me love basketball would bring back my enthusiasm for the game. I was wrong. Not only did I not regain my passion, but my teammates also returned to campus dreading off-season training. After the first week of spring military workouts, one of my teammates told us she was quitting the team. She started the season as an extrovert (even a loudmouth), but had suffered many injuries, and then suddenly got quiet. Later, I learned that she decided to quit because of her own psychological issues.

I couldn’t stop thinking about my friend’s depression, and her decision to leave the team worsened my own anxiety. Now I went to practice with only one desire: for it to end. During workouts, I couldn’t get my heart rate down, even if we had a break. To avoid the possibility of making a mistake, I volunteered to be a sub during pick-up games. Whenever our coaches talked to us about “pushing yourselves,” and “making yourselves better,” it made me sick to my stomach. And now, I added guilt to my fear of failure. I felt guilty, because I couldn’t make myself be positive, push harder, talk more. Every single time my teammates tried to encourage me, it increased my guilt. It was obvious to me that I was the weakest link.

Until again, something happened to show that I wasn’t the only one with these quiet struggles. Another teammate decided to talk to us about her mental problems. She didn’t quit right away, but asked the coach for some off time to make her decision. Although I hope that she will rejoin our team, deep down I don’t think she will. Ironically enough, losing another teammate brought the remaining team closer together. We realized that all of us were struggling, in one way or another. And while this didn’t solve our problems, at least now we knew we had each other.

You might wonder how this story ends. Let me tell you a secret: I don’t know yet. I’m still struggling with depression, and my fellow freshies still have their own problems. But, I’ve realized three things that I’d like to share with you:

One: no matter how close we pretend to be, I can’t know the struggles of my teammates just by looking. For our team to succeed, something has to change, and solving our problems won’t be easy; it will require a lot work, a lot of support, and a lot of honesty.

Two: freshman year is tough on everyone. Even if you have a winning season and play 20+ minutes per game, you will still have your own problems. There is no perfect college athlete career, no true Dream School, and no faultless coach.

Three: you probably won’t be able to balance sports, school and a social life. There just isn’t enough time, but that is alright. You will get through it and learn a lot.

Most importantly, you will learn that college, like life, is never perfect.