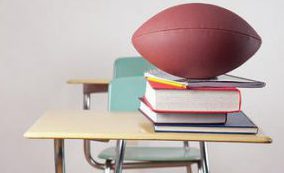 It’s an awesome opportunity to play sports in college. Your teammates serve as a built-in group of friends, you get cool gear, and an athletic scholarship can even pay for part or all of your education. What could go wrong?

Well, if your “education” actually means earning a degree in something worthless, a lot.

There’s a funny thing going on in college sports: the NCAA and college coaches always talk about graduation rates. “Athlete graduation rates are going up!” they say. “College athletes often graduate at higher rates than non-athletes!” they say. True, and true.

Notice what’s missing from those statements? Some crucial information. What degrees are the athletes graduating with? What are they doing with those degrees after college?

Who cares if an athlete gets a degree, if that degree doesn’t help him or her be successful?

I know what you’re thinking: any college degree is useful, right? Nope. Here’s why:

The kicker is that many college athletes don’t have time to do internships. They train year-round in their sports, for more than 30 hours per week on average. Division I athletes train nearly 40 hours per week–a legit full-time job.

Depends. What if that advisor is paid by the athletic department? What if the coach or the athletic director pressure the advisor to keep the athletes eligible to compete, and also to continually increase the team GPA? If you were a low-level employee fearful of losing your job, what would you do? Pressure the athletes into choosing easier majors.

Here’s where the trouble comes in. Remember our poor, bullied academic advisor? He wants that high team GPA, plus the athletes can’t take classes during practice or other athletic commitments. The solution? Pressure the athletes into choosing the easiest electives within their easy majors.

Because electives are flexible, two students with degrees in Communications & Mass Media could have taken very different academic paths. And for every time an athlete takes Basket Weaving 101 as an elective instead of Western Civilization, that athlete has less knowledge and skills to transfer into the workplace.

Fortunately, there’s a lot that you, the high school recruit or parent, can do about this!

Ask detailed questions. Lots, and lots of questions. Every college coach will tell you their athletes get a great education. “Here, look at our rising graduation rates!” You’re smarter than that. Ask for proof. What are athletes majoring in? Who advises them on academic decisions? How many past athletes have done internships? What careers do former team members have?

Do your research. The worst thing an athlete can do is walk into a meeting with the athletic department academic advisor, and say, “I don’t know what to major in.” That’s an open invitation to being funneled into an easy major. Think about your interests, talk to your high school guidance counselor, and take a career aptitude test. If an advisor suggests a major, challenge him or her to state what job that degree will prepare you for. And then, Google the average starting salary of that job.

Be skeptical of “special academic plans.” Some athletic departments abuse independent projects, online courses, and specially designed majors (sometimes called Planned Programs). If a team has a lot of athletes in these types of courses, you have one job: make sure these programs are as educational and rigorous as regular classes and majors.

If you can play sports in college, you should. It’s an experience that will challenge you, and teach you a lot about life. Just make sure you also get a good education while you’re at it. College sports is only four years, compared to 40+ years in your post-sport career, and no one cares more about your future than you do.