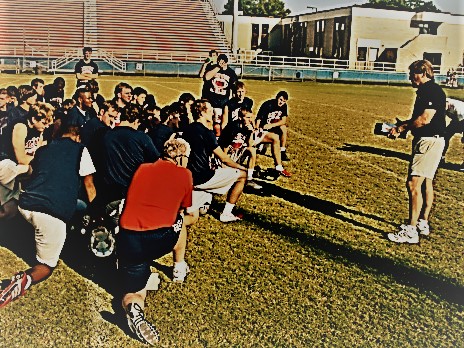 My coach from high school was just inducted into my home state’s Coach Hall of Fame. By number of wins, many consider him to be most successful high school coach of all time. In any sport. As a result, our team did great things, including winning a national high school championship. In fact, every player on our high school team who wanted to play in college was able to, and several eventually graduated with four Division I championship rings. My high school supported our sport in every way possible, and funding was never an issue. Our teachers never questioned missing class for a game, we were featured regularly at pep rallies, and we felt celebrated for our wins.

When I was recruited to play in college, it was a very different situation. I played for a Division III program, and the commitment from the school was absent at best. We constantly fought for funding, and always found ourselves justifying our existence to the athletic department— despite that fact that we consistently won Division III championships (?!). Our team had an annual budget of just $10,000 for our flights, buses, hotels, food and gear, while other teams at our university received many multiples of that amount.

Our team interpreted this lack of funding as the school lacking respect for us, which built resentment. We had zero respect for the rules, and it showed. We were late to student-athlete meetings, constantly faced game suspensions for partying and drinking on campus, and just generally carried around the attitude of “fuck you” toward the athletic department. At the time, we felt more than justified in our disdain. In fact, it still feels good to vent as I type this. The school in turn used our poor behavior to justify not funding us, creating a vicious, dysfunctional cycle.

But this story isn’t about our athletic department—it’s about our coach. Despite having poor facilities and meager funding for a Division III program, he recruited some serious talent—including many players who could have easily succeeded at the Division I level. I imagine a lot of his success in recruiting was related to the academic prestige of the school. That’s why I went there. But, he was a part-time coach (the only one at the school, again due to a lack of program funding), worked full-time at another job, was a “recovering” alcoholic, was managing a recent divorce, and had a young child to care for.

I tell you all of this because I, and most of the team, allowed our disrespect for the athletic program to overflow into disrespect for our coach. He was an easy scapegoat, and not the all-star coach that any of us had in high school. But he had been at our program for over 15 years, and he dedicated a large portion of his life to the team.

In fact, the only reason the program still exists today is because of him. He fought every month of every year to secure us the little school funding we had. He completed community service projects on his own time, logged them as the team’s work, and submitted them to the school to help with our image with the administration. He “negotiated” with his buddies’ restaurants so we could get cheaper meals, and he left his shitty job every day to drive through city traffic and pour his soul into developing us into better players. He cared more about us than anything else in his life, except his kid. He sacrificed so much to coach us, and even managed to take us to several championships.

He may never go down as one of the greats, but he deserved our honor even more than the “average” full-time collegiate coach. Had we had a bit more respect for what this man did for us every day, it would have helped us perform better, have more fun, and given him the dignity he deserved. But I don’t think we fully comprehended the amount of effort this man put into us—I certainly didn’t—and if there is one thing I regret about my college athletic experience, it’s that I didn’t give my coach the respect he deserved. And that I didn’t demand respect on his behalf from my teammates.

Here’s my advice to anybody who finds themselves with a coach that doesn’t quite match the talent or record of your previous coach: remember that he or she really deserves respect from you and your teammates—both directly and indirectly. He or she has a complex life, with problems, feelings, debt, a schedule, a mortgage, and kids. And the reality is, he or she probably cares about the program and your success a lot more than you do. So swallow your pride, and step up as a leader—because you will encounter other situations like this outside of athletics. I promise. Whether it’s a manager who you don’t feel deserves his or her position at work, or a contractor who is late for an appointment to complete a job on your house, other people deserve your respect, and usually the benefit of the doubt as well.

And in reflecting on our series of feuds with the athletic department, I guarantee your future will be filled with people and organizations who don’t give a shit about you. You’re going to have to deal with it. Maybe that means ignoring it, maybe it means changing the situation, or maybe it means getting creative in ways you hadn’t considered. But I encourage you to be resourceful and innovative, never resentful and bitter. That will get you nowhere.

Finally, remember that the way you develop, perform, and behave as a collegiate athlete will shape you into the person you’ll be for the rest of your life. It will impact how you perform at work, how you build professional and personal relationships, and how you behave in future recreational sports. It will affect areas neither you nor I can predict. You’re blessed with a chance to play at the collegiate level, and those few years have the potential to be some of your best. So make the most of it, starting by respecting your coach.