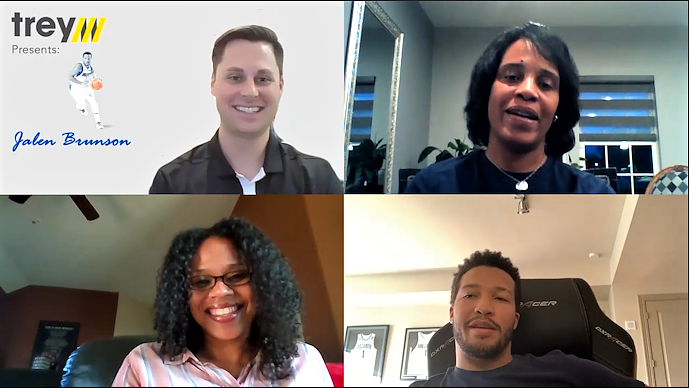 How to succeed in the college decision and transition process

Jalen Brunson and his mom Sandra know a thing or two about success. Jalen was National Player of the Year at Villanova, where he won two NCAA championships, earned a bachelor’s degree in communications in three years, and was named Big East Scholar-Athlete of the Year. Jalen now plays for the Dallas Mavericks. Throughout his journey, Jalen has benefited from the continual support and advice of his mom Sandra, a former volleyball player at Temple University.

In April 2020, Sandra and Jalen Brunson joined Trey Athletes for an exclusive fireside chat to discuss the college decision process, the transition from high school to college, and other tips for success.

Jalen explains that greatness lies in how you spend your time. There are never enough hours in the day, so to succeed, you must clearly align your priorities with your goals. For Jalen, this meant school and basketball always came before social time.

Jalen knows that even though it’s difficult, sometimes what is best for the team means you aren’t the star. Jalen put his team’s success ahead of his ego, which helped Villanova win a national championship and positioned him to grow into a leadership role the following season.

After arriving at Villanova, Jalen quickly realized that college athletes have incredibly demanding schedules, leaving limited time and energy for academics. To balance school and sport, he kept a detailed schedule to ensure he didn’t fall behind on his schoolwork. Jalen also recommends communicating with and building a relationship with your professors, preferably in advance of the season when away games may cause you to miss class.

In helping Jalen choose a college, Sandra knew it was important to pick a school and coach who would invest in him as a whole person. Don’t be distracted by a well-known or flashy program. Make a pros and cons list to clearly define what each program has to offer, compare it to your other options, and anchor to the priorities you value most.

Stick to Your Strengths

To attract the attention of college coaches, Sandra advises you to work on your strengths. Don’t try to be something you’re not. Be the best you can be, work hard, and coaches will see your potential. Coaches are always looking for diamonds in the rough.

Sandra was Jalen’s biggest cheerleader, but she wasn’t afraid to challenge him to be his best in the classroom and on the court. Parents should be encouraging and understanding, but they must also be honest with their children to help them grow.

To get more tips from the Brunson’s, watch the full Trey Athletes x Brunson fireside chat and read about it on Mavs.com, WFAA, and the Dallas Morning News.