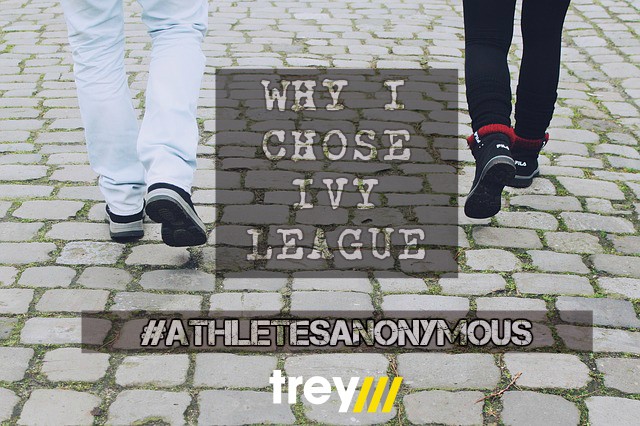 One athlete’s decision between an Ivy League program, and a traditional Division I powerhouse.

I distinctly remember my first recruiting visit to a big-time school. It was on a Saturday—the day of their first home football game. I was invited to go onto the football field with the basketball coaches before the game. I remember the privileged and special feeling that I had as I stepped onto the field and looked at the crowd around me. A lanky high schooler with a laminated badge around my neck, I looked around at the masses of people and at the turf beneath my feet, and felt like I mattered. I was standing on a field that I had seen many times on my living room TV. I took so many “selfies” that day—to share with my friends and family—that my phone ran out of storage space. And this was just the first trip of many that I had scheduled for the fall of my junior year! It sure was going to be a fun and exciting ride!

“Looking back on my recruiting process, I think I made it too hard on myself. This was mainly because I never was truly honest with myself about what was most important to me, until the very end.”

To be honest, the entire recruiting process took me by surprise. I had always dreamed of playing at the Division I level, but never truly pictured myself at a high-major school. Some of my brothers played Division I sports for mid-major colleges, so that’s just where I always pictured myself. I knew I had been performing well on the court, but it caught me by surprise when I began to be contacted by about 10-15 high-major programs per day the summer after my sophomore year. I felt very honored that these programs thought I was good enough to offer me a scholarship. I always knew I wanted to go to a high-caliber academic school, but other than that, I was clueless about how to navigate through the recruiting process.

It didn’t take long for my family and me to grow more and more impressed with what these renowned high-major programs had to offer. The facilities were unlike anything I had ever seen, and they still impress me when I look back at the hundreds of pictures I snapped on visits as a wide-eyed high school recruit. The hundreds of dollars of gear that they neatly laid out in the locker rooms got me every time. Some schools even had me do a photoshoot in their respective school uniform, which was always awkward, but cool nevertheless. Most schools had an entire facility devoted to academic support and tutoring, and another one just for athlete living and dining. Coaches walked in and out of my house for home visits, setting up flashy presentations on my living room TV that seemed to take hours to set up.

Despite being mesmerized by the flashy aspects of these big-time programs, there were certain aspects that didn’t sit well with me. During one visit the fall of my junior year, I was at a football game, sitting in a roped-off section for just the team and the coaches. While it was cool that we had our own section, I looked at how much fun the kids in the student section were having doing the wave. The students were yelling so loud that I couldn’t hear the player next to me, who was saying something about their non-conference schedule. I turned to that player and asked “Woah, what’s it like to be in that student section? It looks crazy.”

The player took a second, and then with a puzzled look said, “Well I’ve never really been in the student section. None of us have. The athletic department always gives us our own seats, so we just sit here for every home game.” I never will forget my disappointment following that statement. It upset me that many of these teams were largely isolated from the rest of the student population. The athletes didn’t necessarily have a worse experience, but they certainly had a very different experience than other students who attended the same university. I wasn’t sure about many things throughout my recruiting process, but I did know that I wanted to have an authentic college experience, and all the positives and negatives that came along with it.

I found the college experience I was looking for on one of my visits to an Ivy League school, as I continued to be interested in getting a high-caliber education. During this visit, it became apparent that the facilities didn’t really compare to some of the Power 5 conference schools. The food in the dining halls wasn’t quite as good. There didn’t appear to be any tutors or academic advisors available to student-athletes. However, as my visit went on, I couldn’t help but feel a sense of belonging. I fit in so well with this team, I could tell right away I had similar interests to the current players. I got the reassuring feeling that these coaches believed in me. Even more importantly, I felt like they cared about me as a person just as much as they did about me as a basketball player. The coaches were well aware that the Ivy League wasn’t as competitive as the ACC, Big 10, or the Pac 12 from a basketball perspective—but they didn’t seem too worried about that. They knew the institution had a unique value proposition and could offer more than any other school in terms of academics and leadership development.

As I continued taking in this school and all it had to offer, I began to pick up on one key aspect of the student-athlete experience. These athletes were true members of the academic and social community. They were treated the same as any other student, and had access to every club and extracurricular activity that was integral to this school’s overall experience. In fact, in many ways, the administration and professors didn’t care if you played a sport or not. The ability to be a part of this community seemed to contribute to the players’ foundation as a leader, being able to share experiences with and learn from people from every walk of life. I took this in a very positive way, as I wanted to have the chance to experience everything that college had to offer.

After weeks of discussion and deliberation, I narrowed my schools down to two—an Ivy League school, and a traditional athletic powerhouse school from a Power 5 conference. The two schools shared an elite academic status, but not much else. I sat on these two opportunities for about three weeks, and remained stressed about my decision until the very end. If I were to choose the Ivy League school, I couldn’t help but consider the reaction within my basketball world. People expected me to pick a perennial athletic powerhouse. Would people think less of me if I chose an Ivy League school? To be honest, I couldn’t help but feel like I could be giving up a little part of myself, as a competitive basketball player. However, in the end I just knew that I had fallen in love with this school, and all it had to offer, and I needed to be honest with myself. I realized that I was more than just an athlete, and needed to make the decision that would make me happy for the rest of my life. I verbally committed to the Ivy League school in May before my senior year, and now, I can honestly say this was the best decision of my life.

When I told people in my basketball community that I had decided to play in the Ivy League, they would typically give me a confused look, and ask “Why?”. I would just smile, because I was truly content in my decision. My high school and AAU teammates and peers always reacted with skepticism. During a national all-star game my senior year, I felt that my teammates treated me differently when they learned I was going to the Ivy League. One of them even said, “Oh, so you’re not playing in college? They don’t have basketball there, right?” I needed to take about five deep breaths before responding to that one. But I grew to love the fact that people underestimated me. I was—and remain—so proud to be a student-athlete in the Ivy League.

Looking back on my recruiting process, I think I made it too hard on myself. This was mainly because I never was truly honest with myself about what was most important to me, until the very end. Throughout my entire recruiting process, I was focused on how people would react to the school that I chose. Every step of the way, I was worried about what others would think, instead of what school would make me the happiest.

My advice to any high school recruit would be to decide what is truly most important to you in a school, and stick to that throughout. You won’t get everything you want from any school, so it is essential to understand what is most important to you—not only for the next four years, but for the rest of your life. Don’t let other people’s opinions or judgements get in the way of finding the place that is right for you. There is only one person who will experience your college decision every day for the next four years, and live with that decision forever. And that is you. People will comment and think whatever they want after you commit to a school, but that is such an incredibly small part of your journey as an athlete, and as a person. The important part is your day-to-day life as a student-athlete, and finding a place that will make you the happiest, and help you build a foundation to be a leader in the world for the next 40 years. All of these things contributed to why I chose to attend and play at an Ivy League college, and I’m proud to say I haven’t looked back since.